Mercury 20 Gallery is pleased to present 2 solo exhibitions and a group exhibition during the month of August.

The title for Eric Bohr‘s exhibition is Levant a word borrowed from the French levant meaning ‘rising’ that is the point where the sun rises and refers to the lands and islands at the eastern edge of the Mediterranean Sea from Egypt to Turkey.

In this current series of mixed media paintings Bohr contemplates that rich region of the world. Using various materials including acrylic ink wax and plaster treated paper and cloth on canvas the body of work is an apolitical and imaginary exploration of cultures including Palestine Israel Egypt and many others that have lately captured the world’s attention with popular uprisings and continuing struggles. The paintings are an imaginary journey into these places and the dreams and fantasies that they create in the artist’s mind.

Eric Bohr was born and raised in Lansing Michigan and apprenticed with Michael Jacobs in Venice California. He has exhibited his work in San Francisco Los Angeles and New York City. He currently lives and works in Oakland CA.

For Paul Mueller photography is an exercise in receptivity and storytelling. Some of his work focuses on human activity and how when captured by the camera that activity can both describe and imply meaning and narrative. Mueller investigates social behavior and interactions through the photographic image. In this work he owes a great debt to the documentary tradition; however his loyalty is less to truth telling than to offering meaningful possibilities.

Blood on the Church Hall Floor which describes the world of amateur wrestling is perhaps the most truly documentary of Mueller’s current projects. While making this work he was drawn to the challenge of maintaining integrity in form and composition in a fast moving and chaotic space while at the same time constructing humorous and good-natured reflections. In both photography and wrestling one cannot always believe what one sees. The pictures in Blood on the Church Hall Floor draw together the spectacle the artifice and the various social dramas taking place in and out of the ring. For this project Mueller made digital images in such a way as to reference grainy film in order to compliment the urgency and low-budget nature of the events.

Paul Mueller received a BFA in photography from the San Francisco Art Institute in 1998 and an MFA in photography from Stanford University in 2001. He is a full-time faculty member in photography at Ohlone College in Fremont CA. Mueller’s work has been exhibited in the Bay Area and elsewhere and he recently received a 2nd place prize for his book Surgery in the show Picturing Home at Emory University in Atlanta. Another of his books New Pictures from East Europe: Ukraine / Latvia Summer 2001 co-authored with Jason Francisco is in the Special Collections at Stanford University. 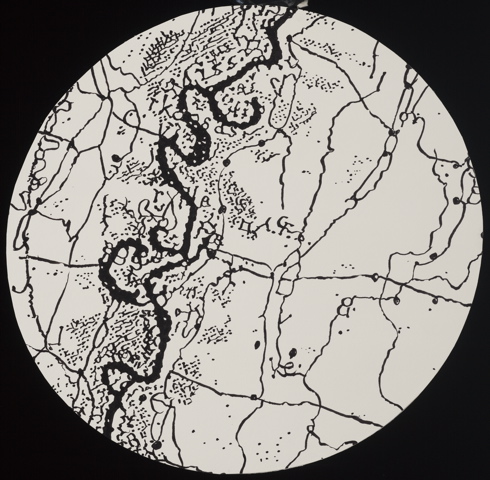 Mercury 20 Gallery artists Terryl Dunn P.K. Frizzell and Mary Curtis Ratcliff address historic floods along the Mississippi River in Mississippi Rising. The artists examine maps of the region and the graphic qualities of the river focusing on the looping calligraphy with which the river inscribes itself on the land. Each artist responds via individual work as well as contributing to a collaborative piece created especially for the show.