In the past few months, while working on her new series Artful Attacks, Karimi has been preoccupied with thoughts of political pressure and sanctions on Iran. The title refers to the mysterious attacks that have targeted Iran’s nuclear power plants in the historic city of Natanz. Her new body of work was shaped organically as a reaction to the coverage of these incidents in the media. As a result, Karimi’s 42-foot-long scroll drawings visualize deconstructed, interrupted, and ambiguously arranged geometric patterns as a metaphor for political pressure and tension.

In her pieces, Karimi has appropriated geometric and tiling patterns with Kufic script from a 97-foot late medieval Iranian document called the Topkapi scroll housed at the Topkapi Palace in Istanbul, Turkey.

In a group of ceramic tiles, Karimi used words that surfaced in both the Iranian press and mainstream western media, such as cyberattack, sanctions, nuclear power, covert war, mysterious explosion, and political tension. Like Kufic geometric ceramic tiles found in the Topkapi scroll as well as Natanz historic shrines and mosques, Karimi’s Kufic arrangements are composed in a somewhat undecipherable manner. The choice for the pairing of black and yellow comes from the standard nuclear power logo.

Through erasing, blurring, re-drawing, de-coloring, and re-coloring the same patterns, Karimi creates new patterns and disturbed surfaces. Artful Attacks is comprised of large scroll drawings, ceramic Kufic tiles, and performative videos collectively representing her emotional unease at constant threats to the historical city of Natanz and its medieval architecture—as an exemplar of the whole Iranian culture and nation.

Pantea Karimi is an Iranian-American painter, printmaker and graphic designer. Her work as a multidisciplinary artist explores the intersection of art, science and history through medieval Persian, Arab and early modern European scientific manuscripts and documents. Karimi has exhibited her works in solo, group and traveling exhibitions in Iran, Algeria, Germany, Croatia, Mexico, the United Kingdom, and the United States. Her works are in private and public collections including the University of California, Davis and Stanford University. She is the recipient of the 2022 Mass MoCA The Studios Residency Award, the 2021 University of California San Francisco Library Artist in Residence Award, the 2020 Holding the Moment Art Award, the 2019 City of San Jose Arts and Cultural Exchange Grant, a 2019 Silicon Valley Artist Laureates Award, and a Kala Fellowship-Residency Award in 2017. Karimi lives in San Jose and maintains a studio in the Cubberley Artist Studios in Palo Alto.

Bay Area artist Christine Meuris focuses on translating traditional home-based arts executed in fabric and fiber into works on and of paper. Her inspirations come from quilting patterns, needlepoint patterns, and woven tapestry. She uses bookbinding cloth, a stiff, loosely woven fabric, to secure paper seams. During the pandemic year while things felt simultaneously dangerous and vague, and social systems revealed themselves to be more fragile than previously imaginable, she began exposing and working with more of this transparent scrim.

In her show Veiled, Meuris explores the idea of casting off self-protection and ignorance with these new semi-transparent works. The show’s title references the “Veil of Illusion,” the veil between the world of the living and the dead. But the inquiry behind these works is about who is protected by the veil—by the not knowing—and who suffers. What is the proper role of illusion? By creating a “cloak” that cannot actually cloak, a “shroud” large enough to function as a burial shroud but that shrouds nothing, and a “veil” that cannot conceal, Meuris is thinking about the ways in which the pandemic year forced a reckoning. It laid bare the dishonesty of our national founding myths, the danger of unfettered globalization, and the unequal distribution of risk and death among the U.S. population and now the world.

Meuris’ use of the alchemical symbol for the elements (the triangle) to create pattern—especially in the Alchemy: Elements series—suggests that a return to a deeper and more respectful relationship with nature is a key part of the way forward. Meuris’ work is a fervent prayer that, having seen how truly thin the veil between life and death is, there will be no going “back to normal” and that going forward truthfully without obfuscation can be beautiful.

Christine Meuris is an artist living and working in Berkeley. She has shown her work in solo and group shows locally, notably at the Berkeley Art Center, Hello Stitch Sewing and Quilting Studio, and in group shows around the U.S. She was the inaugural Digital Artist in Residence at the San Jose Museum of Quilts and Textiles during the pandemic. She has work in the collections of the City of Berkeley, the San Jose Museum of Quilts and Textiles, Kaiser Permanente and the Four Seasons Residences, as well as in several private collections.

Located in Bethlehem, Pennsylvania, the decommissioned Bethlehem Steel factory endures as
an unexpected public attraction. During its long reign from 1857-2003 Bethlehem facilitated
many of America’s major architectural and industrial efforts. In Bethlehem Resurrected, Charlie Milgrim romanticizes the history that lives on in this monumental, dystopian landscape. For this small show, she “Resurrects” these 2017 works a year-and-a-half into the Covid 19 pandemic crisis, as a projection of optimism.

Earth Station Landline is a communication system of old-fashioned telephones that sends
sound through plant growth patterns. Pink Salvia Antenna glows like a radio tower emanating
phyllotactic pulses. Rhizosphere is a layered surface that riffs on the entangled soil-root-plant
interface. Johanna Poethig’s Terrestrial Earth Station series connects in a narrative that unfolds in the Quasi
Extraterratropo zine. The patterns that connect all this work are the mathematical renderings
of algorithms of plant growth, manipulated to open up the space in the compositions visually
and conceptually. 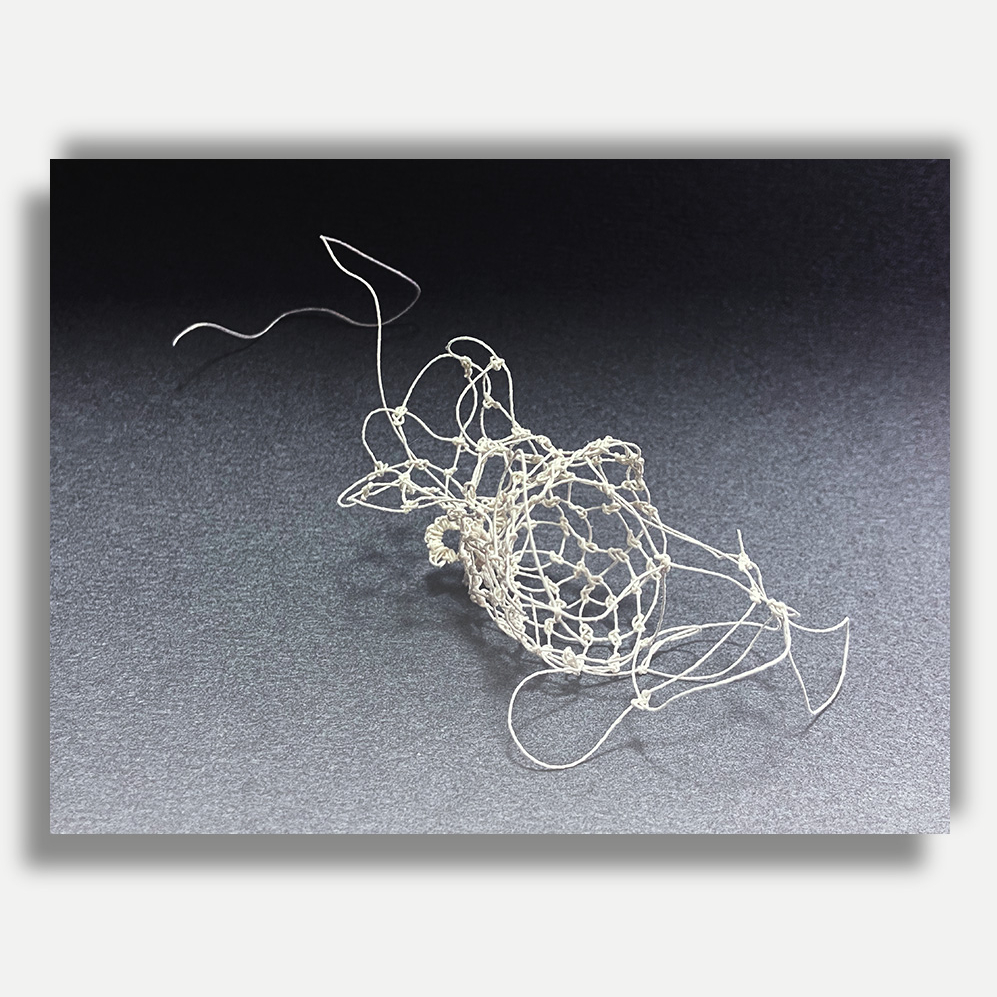 Andrea Brewster’s work from her Slender Thread series explores the nature of fragility and
transience through the medium of paper thread and a variety of techniques including looping,
knotting and weaving. These biomorphic forms were inspired by Brewster’s reflection on the
fragility of life and our individual vulnerability. She states, “As we were all reminded this past
year, it takes only one pivotal moment/event/virus to shift the delicate balance and that
ultimately, our life hangs by just a slender thread.”